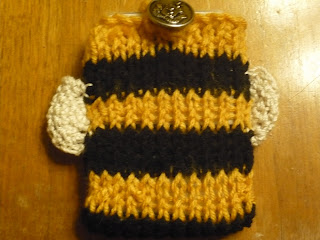 I originally made this adorable little cozy for my older sister, who is obsessed with bees. It is mostly knitted, but the wings were crocheted. It is fairly simple to make, but you need to be able to do both knit and purl stitches. The crochet is merely the single crochet stitch.

*My button has the one little hole in the back, and I just used some of my crochet thread (which is the really thin stuff you sometimes see in the yarn department-look for sugar n' cream yarn, for example) to tie it on. Most other buttons will need regular sewing thread and needles.

repeat from * until it is twice as long as your iPod, making sure the stripes match up with each other when you fold it in half.
I had six stripes of yellow, five of black
cast off.

Then, pick up the four middle stitches on one needle. To do this, just put your needle through one of the top loops of the middle four cast off stitches so that you start with the next stitch to continue the stockinette pattern. Do four rows of stockinette.

Knit or purl both stitches together, then cast off the last stitch.

Weave in all ends.

Fold piece together, right sides together. Sew up the sides, making sure the stripes are even with each other. Your button hole strap should be the only part not sewn up. Weave in those ends.

Now you have the body of the bee!

To put on the button, put your iPod in the cozy and fold the strap over. Put your finger through the button hole, and then put the button on the spot where your finger was, sew it there. This should be a pretty accurate place for your button.

Now all that is left are the wings. If you are a knitter who has never crocheted, this could look pretty daunting. But it's not, don't worry.

Using your yarn needle, sew wings on, making sure to sew down the entire straight side of the wing.

Repeat the whole wing process, sewing the new one on to the other side directly across from the first one.

Once you have finished sewing on the wings, you are completely done! Yay!

Go forth knowing that your iPod is now protected from scratches and cold!
Imagined by Kim at 9:07 PM

How To Knit or Crochet

Deck Out Your Dorm Room!